A Drop of Life

The woman behind the podium said: “Who controls water controls life.”

At the International House on Chestnut Street near the University of Penn’s campus in Philadelphia, we had just watched a short film, part documentary, part drama, “A Drop of Life,” about a small town in India with a big drinking water problem. The award-winning film about the global water crisis was directed by the woman behind the podium, Shalini Kantayya. She is an environmental activist with a big heart and even bigger desire to ameliorate some of the more intractable issues of our time through movie making. This was her second film, but I got the sense, listening to her rattling off statistics as if they were the names of beloved family members, that Ms. Kantayya had been thinking about water long before beginning her film career.

A self-described sci-fi fan who is perpetually inspired by a good story, Kantayya’s film used the sci-fi paradigm with its small group of rebels pitted against the monster conglomerate water company. The town’s citizens were literally dying for clean water while the corporation sold it to them a few cups at a time for more rupees than anyone could spare. Raided by the monster, the old water supply was no longer safe to drink from and had been turned over to the cows, goats and chickens. The people appeared to be doomed. More than that I don’t want to tell you because I want you to see this inspiring film and experience its takeaways first hand — who controls water controls life, not just in developing nations, but everywhere — and if you don’t believe that, just consider what’s happened in the United States within the last few years:

Those are just a few examples. The world is littered with many such facts. Seriously life-threatening facts, and no one is immune, even those who deny facts and science. Kantayya’s message is simple: “We’re on the edge of a storm,” and need to act now. It’s time to “think outside the bottle,” and remember that water is “a shared right that we are not just owners of, but stewards of more importantly.” The film maker believes that one starting policy needs be to end privatization of drinking water supplies globally. Since 2010, the cost of clean water has risen 48% in 30 major cities, yet corporations continue to extract water for pennies on the dollar. Soon supply will be unable to keep up with demand. Pushing the responsibility off to the lower level states and counties is, in fact, irresponsible because these governments simply don’t have the manpower, technology and resources; they can’t affor 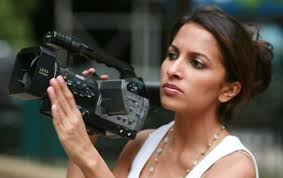 d it. Kantayya says it’s time to hold both the national governments and large corporations accountable if we are to keep up with trends and changes in an ever greater demand for water based on a growing population that strives to an uplift in quality of life and their rights to safe water are guaranteed by the commons for the commons.

So how do we make the leap to empower the commons and guarantee this right to safe water?

How will we, change-averse humans, deal with such sweeping changes in a short span of time? It is as if participating in a social revolution, akin to the digital age that has swept the world, albeit with very old notions of values, habits and norms   It will be an enormous undertaking, but Kantayya has faith, hope, and tenacity, and encourages others to have the same. In doing so, she described a scene from one of her favorite sci-fi movies, “The Empire Strikes Back.”

Pursued by enemy fighters, Hans Solo flies into an asteroid field to lose them:

C-3PO: Sir, the possibility of successfully navigating an asteroid field is approximately three thousand, seven hundred twenty to one!

Solo: Never tell me the odds!

Defying the odds — it’s where Shalini Kantayya lives. It’s where we all need to live.

P.J. Lazos is an environmental attorney practicing in Philadelphia, and the author of “Oil and Water,” an environmental murder mystery about oil spills and green technology. Her work and travels have shaped her water-wise view of the world; she values her carefree access to clean, potable water, and envisions a world where everyone has that same daily experience.