Swimming In Urban Streams After It Rains Exposes You To Fecal Matter? 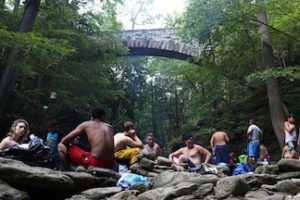 Photo by Kara Milstein for phillymag.com

Swimming can be a fun and refreshing activity on a hot summer day. It’s easy to hear sounds of joy around swimming holes and hard to forget the relaxing shared experiences; the idea brings to mind cinematic depictions of hot summer days enticing viewers with scenes of friends and family sharing an afternoon swimming in water. Swimming pools are the obvious choice for many people to dive into, and the use of chlorine to disinfect the pool water is well known and documented. Unfortunately, many people swim in lakes, streams and oceans without any awareness of the toxic mixture of pathogens or pollutants that may be present.

Ocean water quality forecasts exist for swimmers and surfers. Pathogen levels at recreational beaches spike after rainfall and may remain dangerous for days. Researchers, from The Journal of Water and Health, cited a large scale epidemiological study of 15,000 swimmers in marine waters stating, “Positive associations with adverse health effects indicated a higher risk of illness associated with swimming in ocean water receiving untreated storm water runoff”
Since it is declared illegal to swim in urban waterways – even though the Philadelphia Triathlon scheduled a swim in the Schuylkill river – official pathogen advisories are not readily available as they would be at a public beach. Many cities, including Philadelphia implement combined sewage systems. During heavy rainfall events the city’s water treatment plant may lack the bandwidth to process sewage and storm water simultaneously, so the system experiences combined sewer overflows (CSO). To avoid flooding, sewage flows directly into our streams – untreated.
Despite the presence of evidence suggesting swimming in contaminated ocean water is hazardous, people still enjoy recreating in many freshwater urban streams. For example, Philadelphia’s Cresheim creek is home to the infamous “Devil’s Pool”.  Devil’s Pool is a hotspot for urban swimming and despite the presence of trash and the smell of sewage; people still dive into the murky waters. Although it is officially illegal to swim in this watering hole, adventurers are not swayed by the law, and may be at an increased risk of adverse health effects.  However, don’t forget the occasional benefit of cognitive dissonance. The paralysis of knowing that pretty much anything has risk, can limit people from taking a chance to live through new experiences. Risk exists everywhere—just remember to be safe, and have fun!

Tom McKeon is a graduate student at the University of Pennsylvania studying public health. His research interests include maintaining and improving water quality through place-based interventions.