As I made my way into work the other day, an announcement on the radio alerted me to a flood warning that would be in effect until later that evening.  It had rained the day before, and the day before that, the rivers, brown and agitated, running hurriedly along, bursting their banks after a month of many, often heavy rains.  Unofficially, my friend’s rain gauge counted a staggering 24” of rain here in Central Pennsylvania in the month of August alone.  Officially, according to NOAA, sea levels are predicted to rise from 7 – 15 inches for low emission areas and 10 – 23 inches for high emission areas by the year 2100.  [https://sos.noaa.gov/datasets/sea-level-rise-10m-increments/]  Around the U.S., flooding occurs with 50% more regularity than a decade ago and the frequency, especially for coastal cities, will only increase.  [https://www.theguardian.com/environment/2018/mar/21/flooding-and-heavy-rains-rise-50-worldwide-in-a-decade-figures-show] You don’t need to be a mathematician to realize the strain this puts on the economy as well as the insurance companies’ customers’ pockets.  [https://www.usatoday.com/story/money/2017/09/15/hurricanes-could-push-up-insurances-rarteshomeowners-auto-insurance-rates-could-rise-tx-fl-and-beyon/653203001/] 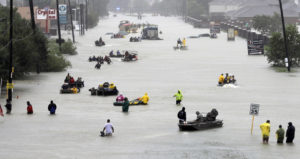 In August 2017, Hurricane Harvey unleashed a fury on the city of Houston that few in modern times have seen, a 500-year storm event that dumped 60” of rain — that’s 9 trillion gallons of water — in two days.  The wind and rain destroyed neighborhoods, submerged highways until they looked like rivers, and caused a $125 billion in storm-related damage.  This week, Hurricane Florence hit the Carolina coast. The damage to life and property has not yet been tallied there, but it, too, has been extreme.  While Houston won’t be the last place to buckle in such an extreme weather event, it’s set the scene for the perfect storm where sprawl and a lack of cohesive zoning laws met climate change with disastrous results. [https://www.businessinsider.com/did-climate-change-contribute-to-hurricane-harvey-2017-8]

The city of Houston (founded 1837), like many major port cities, was built on marshes, flood plains, and forested wetlands.  Similarly, cities like Philadelphia and Boston also started as marshes and wetlands before fill created prime real estate and led to a booming economy, great for a burgeoning city in the 18th century, but not always a plus for a 600-square mile megalopolis like present day Houston.  True, development is grand.  We aren’t called a “civilized society” because we’re still sleeping in trees, but in continuing to pave over the earth’s spongey nature, we leave the science behind and do ourselves and future generations a disservice.

The benefits of wetlands, marshes, bogs and the like are astounding.  Take flooding, for example.  A 1997 study suggested that wetlands in the U.S. saved $23 billion in property damage alone.  I would guess that today the savings is exponentially higher.  In the beginning, wetlands and marshes were nature’s stormwater management plan, the way the earth mitigated flood damage.  Today, the water simply has nowhere to go.  We’ve downgraded wetlands to nuisances, paving them over wherever possible.  We’re literally paying for that decision with increased flood damage and insurance costs. 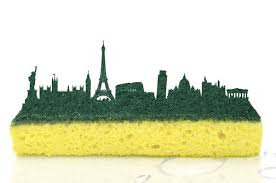 So how can the modern world adjust and undo the mistakes of yesterday?  What about sponge cities?!  Wetlands and swampy areas have always been a necessary component of stormwater management.  If water has no way out it will find your basement, or maybe even your living room if you live in a place like Venice.  Green infrastructure — rain gardens, green roofs, bioswales and the like — holds water like a sponge, allowing for increased residence time so the water can soak back into the ground and return to ground water rather than run off to the stormwater drain.  Permeable surfaces allow for passage so water is not stuck sloshing around topside where people work, live and play, giving the water a chance to return home, in essence, managing flood waters just like wetlands, marshes and bogs used to do. 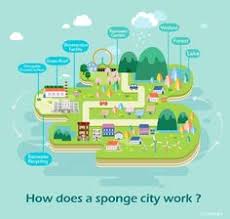 Seven years ago under the leadership of Harold Neukrug, the City of Philadelphia initiated a 25-year green infrastructure program designed to retrofit enough of the City’s impermeable surfaces with green infrastructure that it would reduce stormwater infiltration by 75 – 80%.  [http://www.phillywatersheds.org/what_were_doing/documents_and_data/cso_long_term_control_plan]  Philly has a combined sewer system, meaning when it rains, stormwater infiltrates the sewer lines, and in the case of extreme weather events, overruns the system.  Too much stormwater passing through the waste water treatment plant (WWTP) will drown the good bacteria that eat the waste.  Instead of disabling the system with floodwaters, individual WWTPs choose to bypass the system, meaning the combined sewer water and stormwater, albeit now diluted, is sent directly to the outfall in the river, a necessary, but not preferable option.  Green infrastructure is successful because it reduces by degrees the volume of stormwater entering the system.  Philly’s green infrastructure program has been, and hopefully, will continue to be very successful. 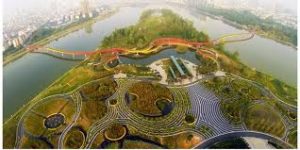 In China, local municipalities are turning the streets “green” much like the City of Philadelphia has been doing.  To combat the recent increase in flooding due to the ongoing spread of impermeable surfaces exacerbated by climate change, China is investing in green infrastructure such as rain gardens, rooftop gardens, bioswales, plant beds and permeable pavers.  [https://www.theguardian.com/world/2017/dec/28/chinas-sponge-cities-are-turning-streets-green-to-combat-flooding]   In addition to soaking up water, the hope is that sponge cities can soak up some of the urban pollution, trapping it in the soils and keeping it from returning to the rivers through the stormwater system.  Wetlands and their ilk are enjoying a renaissance!

In the Lingang district in Shanghai where only 20-30% of the rainwater is able to infiltrate back to groundwater, the government has invested $119 million in retrofitting the city to include green infrastructure and hopes to attain rainwater re-use levels of 70%.   [https://theconversation.com/chinas-sponge-cities-aim-to-re-use-70-of-rainwater-heres-how-83327]  Lingang’s focus has been on green roofs since the existing park infrastructure is generally higher than street level and, as such, not a good candidate for retrofitting because of the sheer amount of soil that would need to be removed and relocated. 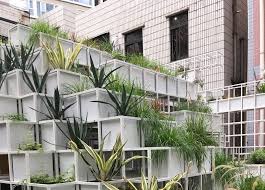 Government officials in China hope that Lingang can be a model for other cities wishing to do the same. [https://www.businessinsider.com/china-is-building-sponge-cities-that-absorb-water-2017-11]  Part of the challenge is tailoring the retrofitting projects to each individual city, finding the proper green materials, and money, money, money, since many Chinese cities, like here in the U.S., are experiencing a municipal debt crisis. Another part of the challenge is to bring together the many agencies that normally work within their silos. It is here where academia can be of great assistance.  So far, the 30 cities in China involved in the sponge city project have received a total of $12 billion.  This may be steep price tag, but it comes with a wellspring of benefits, including social, economic and public health; all well worth the investment.  Just ask Philadelphia. [https://e360.yale.edu/features/with-a-green-makeover-philadelphia-tackles-its-stormwater-problem] Or the insurance companies.

P. J. Lazos is an environmental attorney practicing in Philadelphia, and the author of “Oil and Water,” an environmental murder mystery about oil spills and green technology. Her work and travels have shaped her water-wise view of the world; she values her carefree access to clean, potable water, and envisions a world where everyone has that same daily experience.