Wait, Before You Flush

When our kids were growing up, the rule was no potty talk at the table. Of course, that just emphasized their need to tell fart jokes, their favorite topic, and then laugh hysterically. Now, in a strange twist of events, I talk about poop and it is they who want to censure me. If you’re a water junkie like me, global wastewater is a fascinating topic, and one covered extensively at the Global Water Alliance’s April 5th Symposium at the Wharton School of the University of Pennsylvania. Speakers from around the world brought their best ideas and biggest worries to the symposium. Hanging over the symposium was the realization that by 2050, there will be over nine billion of us on the planet who are all going to be thirsty — so much so that the World Economic Forum sees the lack of fresh water as the biggest threat to human survival. Yet, I left that gathering of activism, forward thinking professionals (and eager students) with hope, well-reasoned hope: we will not only to survive, but thrive, if we get the message right and reach all human ears.

A lofty goal by any standard and also courageous. Eliminate dumping? Halve the proportion of untreated waste? Increase safe reuse? It seems impossible given our current one sided, e.g.supply-side economics which inherently requires the continued creation, production, and consumption (or waste) of goods. Therein lies the key to success and survival: change the way we think about consumption, including waste and wastewater. In doing so, the most pressing topics of our time, the ones that could literally bury us — whether in wastewater, plastic, or hazardous contaminants, or the fact that two-thirds of the world lives with some degree of water insecurity — could be the very things that save us by turning a losing proposition into a money-making one.

How does our species evolve? For centuries, it has been through the written word. Early on, only the richest among us got an education wherein they learned to read and write. Then those in power realized that educated labor was more productive labor. Publi 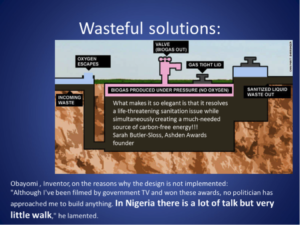 c Education followed and became a norm. Society needs a well-educated populace, thereby making it a safer, saner, more egalitarian. Without the written word, there would be no wide spread religion, no rule of law, no “body of” science, no way to transfer ideas from one person to millions, no handbook for living.   Civilizations thrive through the written word (and now film and digital recording) and through the written word we also can signal or observe when things are going awry. Human emotions like group hate, fear, and a mentality of scarcity are but a few of the forces to be added to the reasoning about the political economy. We realize that we can’t always be about consumption and overuse of the earth’s resources for the few who can pay to the detriment of the rest.

We also can’t sit back and wait for the “deus ex machina” defined as “an unexpected power or event saving a seemingly hopeless situation, especially as a contrived plot device in a play or novel.” The Greeks used this all the time to resolve their stories; write yourself into a corner and have a god come down from Mount Olympus to save you. But our earth in the balance is not just a story and no one coming to save us. In order to evolve a species needs to adapt, and with regard to water adaptation that requires a global world view if we are to become better, bolder, more visionary beings; ones less insistent on domination and more persistently cooperative. What better way than to start with the medium that brought us all into this world?

Think about it. How much of wastewater is truly “waste”? Waste, when used as an adjective, is defined as: “(of a material, substance, or byproduct) eliminated or discarded as no longer useful or required after the completion of a process”.

What we flush is being eliminated, but should it be considered discarded? Not if we are thinking clearly. When it gets to the wastewater treatment plant it goes through a series of processes designed to cull the solids from the liquids and to neutralize what is harmful and use what remains. Filtration, aeration, digestion, clarification, and a series of other treatments that result in a benign (according to National Pollutant Discharge Elimination Standards) effluent disposed of via an outfall into the river, and a remaining sludge that’s been picked clean by sludge-eating bacteria to make it farm-field ready. To that extent, we’ve always reclaimed a portion of wastewater, but we can do better and that’s where the “resource” water comes in.

Resources are defined as “a stock or supply of money, materials, staff, and other assets that can be drawn on by a person or organization in order to function effectively: [as in] local authorities complained that they lacked resources.” Nitrogen and phosphorous are sold as fertilizer and can be reclaimed from what’s in those sewer pipes whisking your toilet water away. Treated wastewater is safe and can be used to offset water scarcity. Under this scenario, wastewater becomes a treasure trove of commodities if you just know how to clean or reclaim it.

But in order to make it work, a few things have to happen, like keeping our waste stream free from those elements that could interrupt the flow of resources such as solids that are not biosolids, or pharmaceutical waste, or paper and other debris, like tampons and baby wipes, as all these items will ultimately effect the quality of the resourcewater; like sending a message that wastewater is actually resource water with many hidden benefits; and the most important, accepting that this type of resource renewal is the new normal. By changing our minds about how we reuse water, we can go from a 2-3% reuse rate to something far more sustainable (in submarines and on a spaceship the re-use rate is close to 100%) In doing so, we’ll assure ourselves and our progeny that the 366 quintillion gallons of water on earth — of which less than 1% is potable — will last as long as mankind does. 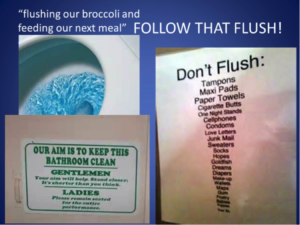 So before you flush, think of the four R’s of sustainable water use: reduce, reuse, recover and resource. When Tuesday night’s macaroni and cheese comes back as fertilizer for your summer broccoli and tomatoes you can take pride in being part of the circle of life. Do that and there will be sufficient resources for everyone. We are the ones we’ve been waiting for.

P.J. Lazos is an environmental attorney practicing in Philadelphia, and the author of “Oil and Water,” an environmental murder mystery about oil spills and green technology. Her work and travels have shaped her water-wise view of the world; she values her carefree access to clean, potable water, and envisions a world where everyone has that same daily experience.