How’s this? In the future we will fight wars for water. Sound plausible or more like SciFi? Probably no one really thought we’d fight a war for oil, but then Iraq happened and that strange concept became part of our vocabulary. Or how about this: Out of all the water on the planet, less than 2% is potable. Industry, agriculture, and little ole’ you have to make due with just 2%. Can we be or feel secure about our access to water, and not have to worry about claims by others, when those others now number in excess of 7 billion?

Until lately — think California drought, Louisiana flooding, and wildfires out west worsened by lack of rain — we’ve been lucky here in the U.S. Aside from some pockets of desert, the nature of North America is one of an abundant water supply which we’ve used to our advantage, freely, and without a care for where it comes from or whether it will run out. Flush toilets, indoor plumbing, and hot or cold water, delivered directly to your tap with the flick of a wrist are all part of the backdrop of a modern day, developed country (for an exception to this picture; visit http://www.navajowaterproject.org/ and related action groups).

At my last house, a 140-year old Victorian, there were two large cisterns under the pavement just outside the back porch. They held several hundred gallons of water. My husband believes that the house was built with indoor plumbing so it’s unclear to me why the need for such large cisterns. Their presence denoted a sense of water insecurity since rain barrels and sustainable gardening weren’t even concepts in 1876 when the house was built. It’s possible though that the town, a tiny suburb of Lancaster City (established circa 1729), didn’t have an entirely dependable water supply system at first, resulting in a need for water on hand, a condition which the cistern remedied.

In Manciano, a small town in Tuscany where I spent some time one summer, the water system shuts down at 9 p.m. each evening. At least part of the town dated back to Roman times. The town center of Montemerano spins round and round in a slow rise up the hill while row houses line both sides of the narrow street. At the top a small castle sits perched like a wedding cake. Manciano is a wonderful place to vacation but the proximity of the houses across the street makes it tough to have any privacy at all. You could hear your neighbors cooking and snoring and calling their kids home for dinner.

It was a tiny town, population about 7,000. My friends, the owners of the house, lived in Rome and this was their vacation home. At night they would fill plastic water jugs and set them next to the toilet. If you got up to use the bathroom during the night and needed to flush the toilet you filled the tank afterwards with water from the jug. I say “needed to flush” because the rule was “let yellow mellow and if it’s brown flush it down.” That may sound gross to a developed country dweller, but it is commonplace in water conservation parlance where water scarcity is a reality. At 9 a.m., the water came on again and you forgot the evening struggles, but, cognizant of the work it took in the night to keep things flowing, my friends unconsciously continued their water conservation practices throughout the day. Sublime. 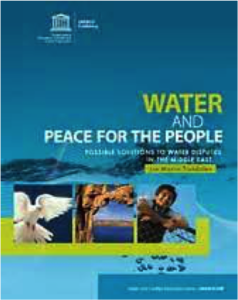 September 21 is the International Day of Peace. While access to water may not be the first thing you think of when you think of peace, I submit it’s probably because you haven’t experienced a water shortage, at least not one of any duration. Less peaceful was Saddam Hussein’s dam construction project in Iraq which diverted the water of the Tigris and Euphrates Rivers — the area known as Mesopotamia, the Cradle of Civilization, also the Fertile Crescent. In addition to agricultural uses, the dam project’s intent was to drain the ancestral lands of the Marsh Arabs as punishment for hiding Iraqi rebels during times of uprising. Definitely not peaceful.

So this week, or how about forever, conserve where you are and when you can. Be grateful for the flick of the faucet. Keep water plentiful. Keep water peaceful.