We’ll Always Have Paris. Or Will Wee?

Can we just agree that nothing screams “civilized society” like a well-kept public bathroom.  Costs. maintenance, vandalism, and the like have resulted in the dwindling of this precious amenity, but if society is to retain its sense of propriety, then public toilets are a must.  Sometimes in the early morning hours, the urine smell at the entrance to my office in Center City Philadelphia is so bad that I have to hold my breath.  Sheltered by a roof and sitting back from the street, this particular space offers a bit of privacy, and while I don’t condone peeing in corners, if you’re homeless, it’s the perfect spot.  But it isn’t just the homeless who need to avail themselves of a public potty.  When you’re touring a new city or just out for a day around town, eventually, you’re going to need a place to wee, and since most establishments follow the rule that bathrooms are “for customers only,” that leaves the public toilet.

Let’s start with what I consider to be the gold standard here in the U.S.:  the public bathrooms at Bryant Park in NYC, a gorgeous 315-sq. 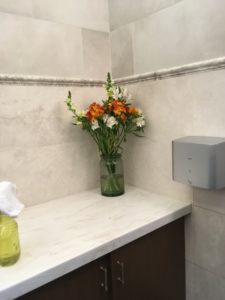 ft. Beaux Arts structure which would be equally at home in a 5-star hotel, one that The New Yorker calls “the Tiffany’s of public restrooms.” The 25-year old bathroom recently got an upgrade and now it’s even more divine.  Upkeep runs about $270,000 a year which covers over 14,000 rolls of toilet paper as well as attendant’s salaries, and about $14,000/year for flowers (yes, real flowers!).  Attendants earn between $25,000 and $30,000/yr., all paid for with private donations and sponsorships.  They play classical music in the Bryant Park bathroom and any change to the lineup has to be run by the staff.  In other words, the workers are invested.  If you need to pee in NYC, Bryant Park should top your list.

Other NYC public bathrooms include the ones across from Washington Square Park, also attended, also clean, and large enough to accommodate the masses, as well as the Loeb Boathouse in Central Park, an indoor bathroom servicing the restaurant, but which isn’t for patrons only.  The bathrooms at Penn Central are a little less glamorous, but well-used and much needed after a long train trip.  None of these bathrooms share the opulence of Bryant Park, but opulence isn’t the defining criteria for people who need to pee — access is.

19th century, a step up from the bed pan which, after use, was dumped out the window into the street or French drain.  Disease was rampant and the average home was a hotbed of bacteria.  It’s a wonder anyone made it out of the 19th century alive; today’s homes are sterile in comparison.

As Paris became increasingly moderne, communal toilets, or chalets de nécessité, were built, and women — dames pipi — hired to monitor them.  In the 21st century, nearly everyone in France who enjoys the comforts of a residence also enjoys indoor plumbing.  Sadly, it is this very luxury which may prove to be the downfall of the remaining dames pipi.  About a dozen women, all immigrants, have sued the city to reclaim their jobs, caught in the city’s revitalization efforts which included charging people to pee.

The company that bought the remaining public toilets 2theloo wanted to create an extraordinary bathroom experience for the average Parisian, whatever that might mean, and the dames didn’t fit 2theloo’s vision so they were let go.  The dames pipi filed a lawsuit and lost and now Paris has to pay to pee.  Not to make light of the plight of these noble women who’ve cleaned the

public’s toilets for decades only to be unceremoniously dumped (sorry!), but what about the people who still have to wee??

Two decades ago as many as two dozen toilets in Paris were free, but no longer.  So where do people go when nature calls for surely not everyone can pay?  Perhaps it was when the lamp post fell on a cab driver after one too many dogs had peed on it, causing the base to erode and the post to fall, or maybe it’s the persistent smell of urine in the streets and alleyways, but whatever the reason, France needed a solution.  Paris’ current answer is the Uritrottoir urinal, a composting public toilet that also grows flowers and whose composted material may be used for fertilizers.  It’s a truly sustainable product, beautifully well-appointed, well-tended, and a welcome relief if you need it, although I’m still not sure how women are able to use it given that it’s “open air.” 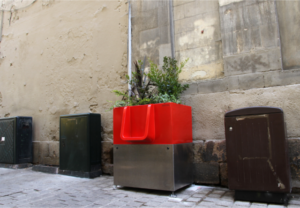 Other venues offer different solutions.  For the city that wants accessibility, but doesn’t want to give up too much prime real estate, there are the beautiful, compact phone booth toilets such as the ones in Switzerland.  Their two-way mirrors are practical and able to be used on any street corner.  You can watch the world go by while you’re in there doing your business; an unnerving experience, maybe, if you’re worried about the two-way mirror failing.

Of course, NYC has its own version of this cutting edge commodity of personal hygiene: https://youtu.be/P4t3oeXxXGk

If you’ve ever desperately needed a bathroom, you know how welcoming the sight of any one of the above options can be.  So perhaps it’s time to “give a shit.”  Whether you’re here or abroad, November 19th is World Toilet Day.

To celebrate, why not do something to help alleviate the suffering of some of the over 2.4 billion people who don’t have access to a toilet? Donate to a charity that builds public toilets, contribute to financing a micro loan to help a family add indoor plumbing to their living situation, educate yourself on the state of wastewater in your country and the world.  Due to our combined efforts, maybe someday everyone will have a place of their own to wee.