When Fish Poop Feeds the World

If you or your kids have ever won a goldfish at a carnival, chances are you took it home and stuck it in a glass bowl where it swam happily for years.  We had one live for six years until the little rascal finally called it quits.  Soon after we brought the fish home, I noticed that the once clear water was becoming cloudy, then murky, and because goldfish are champion poopers, the water eventually looked like a bayou.  The water got so cloudy that guests to our home  suggested a GoFundMe page to “Save the Fishes.”  The obvious remedy to our cloudy fish water was to clean the tank once a month or so, although the goldfish never really seemed to mind, a testimony to their hardiness which will become important later.

So what if you didn’t want to clean the tank so often, or better still, what if you wanted to put all that poop to good use?  Well, lucky for you there is now another option:  an aquaponics tank.  What is aquaponics, you ask?  Here is the definition from the online dictionary: 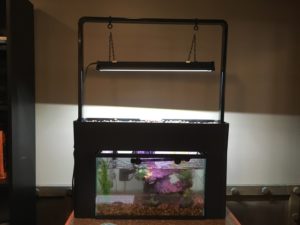 In the case of our little goldfish, while the fish waste sat at the bottom of the tank it broke down into ammonia which converted to nitrites and then nitrates, basically forming a cesspool in our fish tank.  Instead of creating a cesspool, however, how would you feel about creating your own wastewater treatment plant?  By using the fish poop to fertilize the plants growing in a tray above the tank you eliminate the need for outside water or fertilizers.   Ingenious, really, since the fish need clean water, the plants need waste water, and no part of the system is dependent on rain water or pesticides to grow.  Hallelujah, totally organic food grown inside in a controlled environment that doesn’t put a strain on the soils or watershed with the overuse of fertilizers and toxic chemicals to control pests.

This solves two problems that have been growing steadily on mankind’s horizon:  overfishing of the earth’s oceans and growing enough food to feed the approximately 7.7 billion people [http://www.worldometers.info/world-population/] alive today (not to mention what to do with all the poop that 7.7 billion people generate).

Luckily, due to an increase in aquaculture, farmed fish production is on the rise and is a necessary part of our planning to feed the 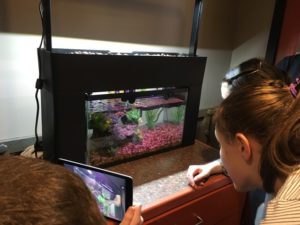 approximately 9 billion people that will be living on earth in the middle of this century, according to the Food and Agriculture Organization (FAO) of the United Nations 2018 report on world fisheries and aquaculture.  FAO. 2018. The State of World Fisheries and Aquaculture 2018 – Meeting the sustainable development goals. Rome. Licence: CC BY-NC-SA 3.0 IGO.

As part of my volunteer work with the Jr. League of Lancaster, our Girls in STEM committee is spearheading a pilot project to get aquaponics tanks into as many classrooms as possible in Lancaster County.  Over the last couple weeks, we’ve installed five aquaponics tanks at two different schools in Lancaster County, one the Stone Independent School, a hands-on learning high school in the City of Lancaster, and the other four at Fritz Elementary School in the Conestoga Valley School District where we put a tank in each of the school’s four second grade classrooms.  A sixth tank is slated to be installed at the Lancaster Science Factory in February in conjunction with their post-construction expansion of the museum. 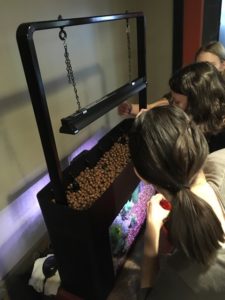 The high schoolers at Stone are creating a video about their experiences with their aquaponics tank that will then be used as part of the exhibit at the Science Factory, resulting in lots of exciting collaboration going on throughout this pilot project.  If successful, we hope to roll it out to all the second grade classrooms in Lancaster County, an ambitious project that will require lots of grant money, but imagine the impact:  a whole county of second graders with firsthand exposure to the importance of ecosystems, water conservation, plant systems and nutrition all with one in-classroom device.  Plus, as an added bonus, the presence of fish in the classroom helps relieves kids’ stress.  [https://www.mentalhelp.net/blogs/stress-reduction-tropical-fish-and-aquariums/]

The aquaponics system works on a timer so for fifteen minutes of every hour the pump circulates the waste up into the clay-filled tray where the plant material grows, depositing its bounty of fish poop and returning clean water to the tank.  A light suspended from a bar that rises above the tank provides the UVs for the plants to photosynthesize the chlorophyll and the fish provide the fertilizer.  We’ve stocked the tanks with some baby goldfish that will grow to be 3”-4” long because, as we’ve determined already, goldfish are a hearty bunch and prolific poopers.  A couple months of this process and voilá, organic herbs and vegetables grown right in the classroom.

Now, before you think that you can feed the world on what you’ll be growing, this is just a little ten gallon tank.  The tray discussed 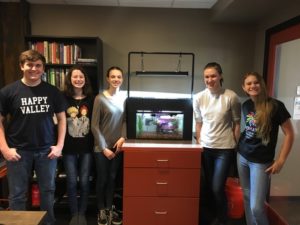 above can support a few different kinds of herbs, some baby tomatoes and little peppers or other lightweight veggies, but don’t go looking to grow pumpkins or watermelons.  Still, it’s a first step before we think about a bigger project like the one they have going on at Commonwealth Charter Academy [https://www.abc27.com/news/local/harrisburg/commonwealth-charter-academy-opens-large-aquaponics-facility/1654508926] where they are doing a lot more than growing a few tomatoes.

Want to grow fresh, organic vegetables that are easy on the planet?  Go ahead and get yourself an aquaponics tank.  You don’t need anything else but a few seeds and your little fishies!