Let’s Talk Water: A Series of Blogs by P.J. Lazos

I think that if Francois Auguste Rene Rodin (1840 – 1917) knew that one of his most famous sculptures, “The Thinker” had become the symbol of World Toilet Day, http://www.worldtoiletday.info/, a day established to raise awareness of the need for global sanitation, he would be proud. It took Rodin 22 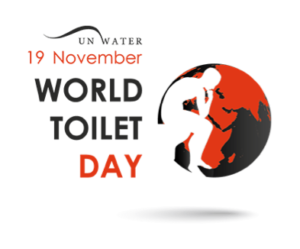 years to take “The Thinker” from the first small plaster version to the first large cast bronze version, possibly without having a toilet himself. For while the prototype for the modern toilet was made in 1596 by Sir John Harrington, the godson of Queen Elizabeth I (who you just know had a toilet), toilets didn’t become the norm for a couple more centuries. With the improvement of the “ballcock” by Thomas Crapper in the late 19th century, and the advent of the industrial revolution, finally common folks could be “flush” with the improvements this new invention afforded them; no more chamber pots or late night trips to the outhouse. 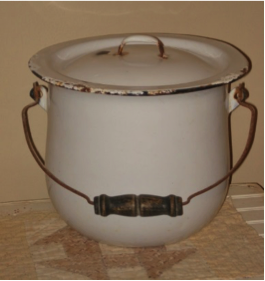 nded in 1837), I was amused to find that this grand institution had something in common with 1/3 of the people on this planet. There were no toilets, at least not in the building where we studied, a grand artifice with cavernous rooms and 12-foot windows. What they did have were large holes cut out of a concrete floor that opened into a large metal pipe and led to who knows where — I don’t really recollect, but I do think it was something more than a pit. Each hole had its own stall, so privacy wasn’t an issue, but you certainly wouldn’t spend hours or even minutes in this kind of facility. It took a certain amount of leg strength to hover over the hole and hit the angle just right, and from the smell, I could tell that plenty before me had missed their mark, and while I would have no problem using this particular bathroom system even today, smell notwithstanding, I’m pretty sure I won’t be visiting the University of Athens when I’m, say, an octogenarian.

Even farther back in high school in the late 70’s – before terrorism or the Department of Homeland Security – one of my classmates blew a urinal off the wall in the boy’s bathroom using two sticks of dynamite, M-80’s, I believe, and flooded a good deal of the A wing in the process. He called it a prank, despite its uber-destructive nature, yet because it was the 70’s, he earned a suspension, not an expulsion. Today, I’m pretty sure he’d get jail time and probably a spot on some Department’s watch list. Also, if he knew he was adding to the fate of those unlucky 1 out of 3 people who don’t have a literal pot to piss in, perhaps he would have thought twice about the M80s.

We Americans are high on the sanitation obsession list.   Today, I live in a house that has three toilets although I grew up in a house with only one. We have a love affair with our bathrooms, me included. We spend hours in them, brushing our teeth, washing our faces, using the commode, staring at our reflections in the mirror while we brush our hair or study our pimples, we luxuriate in the Jacuzzi tub, and on and on, while those other 1 in 3 lack even the most basic sanitation needs. The statistics are compelling and more than a little sad. Out of those 1 out of 3 approximately 1 billion (yes — nine zeros) people defecate out in the open.

Stop for a moment and think of the indignity of that and then cast your thoughts about the other issues, the increased risk of rape or sexual assault, the potential for violence perpetrated upon you when you are at your most vulnerable, and if even these things are not enough, the risk to human health since open defecation means humans are coming into contact with the feces they left the day before, or that someone else has left, increasing the risk of diarrhea, spreading disease in the soil and water, and from person to person by shaking hands because if you don’t have a toilet, you likely don’t have access to clean water to wash your hands afterwards, so every human contact becomes another opportunity to spread the germs. Over half of all cases of diarrhea – which, BTW, disproportionately effects children – are from a lack of access to clean water, sanitation and hygiene (WASH), and while everyone can get behind funding a water pump for a village because it’s good clean fun, toilets are like the poor cousin of the WASH world, garnering only a fraction of the funds, both public and private, that are available for access to water. Let’s face it. Nobody wants to talk about poop unless you’re a toddler and being potty trained and then maybe that’s all you want to talk about.

November 19th is World Toilet Day and this year’s theme is “toilets and jobs.” It almost sounds like a joke, eh, until you think about the 1 in 3; or the enormous infrastructure that has been built “behind” the commode. World Toilet Day began in 2001 and became an official UN International Day in 2013. I don’t know when they adopted “The Thinker” logo, but I do know that we should all do a little thinking ourselves about not only our own, but the world’s sanitation needs. For what is more essential to a human being’s health, dignity, and welfare than a place to go to the bathroom and a place to wash your hands afterwards?

P.J. Lazos is an environmental attorney practicing in Philadelphia, and the author of “Oil and Water,” an environmental murder mystery about oil spills and green technology. Having traveled extensively, she values her carefree access to clean, potable water and envisions a world where everyone has that same daily experience.